Showing posts from February, 2020
Show all
February 26, 2020
Looking Through the Lens of Guilt

They said to one another, "Surely we are being punished because of our brother. We saw how distressed he was when he pleaded with us for his life, but we would not listen; that's why this distress has come on us." (Genesis 42:21)

Guilt can live quietly below the surface of our lives like a simmering soup, gently stewing quietly, its pervasive aroma filling the room. Like a low grade fever, its sometimes forgotten presence breaks the surface when we must exert ourselves or when we are alone with our thoughts. Guilt is one of those things that bends and perverts our sight. It is the enemy of an accurate perspective.

Joseph’s brothers knew guilt. And rightly so. With murderous intent they thew their brother into a pit, and then (in some sort of act of twisted mercy) sold him as a slave to a passing caravan of Ishmaelites. On top of that, they covered up their hateful plot with deception. And thus began a life free from the burden of their br…
Post a Comment
Read more
February 21, 2020
In the Hands of a Hungry Pilgrim

Discarded not, nor left behind
From elder hearts come treasures prized
Not set aside but dearly held
In the hands of a hungry pilgrim

We carry in us, in these earthen vessels, treasure of great worth and value, deposited by the Lord. Like an old book, some of us are wearing with the years and feeling the cricks and cracks of an aging body. But still, the treasure remains.

We may feel, like an old book, threadbare and tattered, but that does not mean we are not useful in the Master's hands. Our pages may be yellowed and stiff, but let us not lose heart, for the y…
1 comment
Read more
February 16, 2020
God’s Favor
So Potiphar left all that he owned in Joseph’s care; he did not concern himself with anything except the food he ate. (Genesis 39:6)

The warden did not bother with anything under Joseph’s authority, because the Lord was with him, and the Lord made everything that he did successful. (Genesis 39:23)
Joseph was undeniably a man on whom the favor of God rested. And who doesn’t want the favor of God in their lives? Some of us have even adopted the angelic proclamation over the Savior’s mother as our own, declaring, “I am blessed and highly favored.” But in our desire for God’s favor, have we also embraced its multi-layered purpose in our lives? Have we thought about, and do we understand, the why behind God’s favor?

Joseph, a Hebrew captive, had been sold as a slave to Potiphar, an Egyptian officer of Pharaoh, king of Egypt. Joseph’s low position was an opportunity for the favor of God to manifest. But trial was at the door waiting for opportunity to manifest as well. And soon, for…
Post a Comment
Read more
February 08, 2020
The persistent ramblings of a power-stripped enemy

In his sci-fi book, “Perelandra”, C.S. Lewis portrays the devil as a dead-stare constantly talking man whose arsenal of weapons is his multiplication of words. His tactic is to talk lies from various angles until they seem true; to use different words to say the same untruth until it rings true. It’s an accurate depiction of the schemes of the enemy of our souls and his team of fallen angels.

The truth is, though, God has you on a mission and the enemy will try to stop you from fulfilling that mission by “talking you to death”. And sometimes, like background voices that we stop realizing are there, his constant murmur quietly settles into our environment. But we are not alone in this struggle.

Nehemiah faced a similar struggle in his effort to rebuild the fallen city of Jerusalem, and he took the right tact in dealing with it.
Nehemiah knew the enemy and knew his goal.

Look at this story from Jacob’s life,

38 These twenty years I have been with you. Your ewes and your female goats have not miscarried, and I have not eaten the rams of your flocks. 39 What was torn by wild beasts I did not bring to you. I bore the loss of it myself. From my hand you required it, whether stolen by day or stolen by night. 40 There I was: by day the heat consumed me, and the cold by night, and my sleep fled from my eyes. 41 These twenty years I have been in your house. I served you fourteen years for your two daughters, and six years for your flock, and you have changed my wages ten times. 42 If the God of my father, the God of Abraham and the Fear of Isaac, had not been on my side, surely now you would have sent me away empty-handed. God saw my affliction and the labor of my hands and rebuked you last night.” (Genesis 31:38-42)

Jacob trusted God with the injustices in his life. And we should do the same. But why? Why should we trust God with the “unfai…
Post a Comment
Read more
February 05, 2020 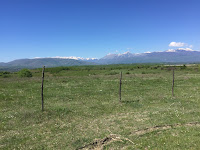 Our Father, With Us

You can learn a lot about God and people by reading the narratives found in scripture. God graciously gives us a little window to see into His heart and our nature. One such story is the account of Moses being called to action at the burning bush. The LORD has called Moses to go to Egypt and bring deliverance to His people. But Moses is feeling quite ill-equipped for such a great task. His flaws rise before his eyes like the stinging smoke of a campfire.


Yet God continues to call and even graciously addresses Moses' concerns. We read in Exodus 4,

Moses answered, “What if they won’t believe me and will not obey me but say, ‘The Lord did not appear to you’? ” The Lord asked him, “What is that in your hand? ” “A staff,” he replied.
“Throw it on the ground,” he said. So Moses threw it on the ground, it became a snake, and he ran from it. The Lord told Moses, “Stretch out your hand and grab it by the tail.” So he stretched out his hand and caught it, and it became a staf…
Post a Comment
Read more
More posts