Contentment is a lifestyle.

A lifestyle, I would say, that is not pervasive in our current western culture. After all, one very familiar dictate which has been handed down to us is, “life, liberty, and the pursuit of happiness.” Our inalienable rights.

The life ruled by the mentality that happiness comes from something you don’t have is insidious, filled with emptiness, and rewarded with grasps at fleeting satisfaction. And this lifestyle is dangerous, for it creates in us an increasing hunger. And for those of us who are weak-willed, that means danger.

In the written account (called the book of Acts) of the early Christian church we see the recounting of a man who I believe was on a journey for the next best thing. He was a thrill seeker; discontent with his current situation, bitter at his lot in life. Disappointed. His name was Simon and he was an entertainer – a magician.

He thrilled crowds and their response thrilled him. But when he received the then new Christian faith that was being preached in his town, he turned from his life of entertainment to follow those who had preached to him. The miracles he saw following these men of God thrilled him, probably much in the same way that his acts of sorcery had thrilled his followers. The desire for the new shiny nickel had never left him.

He wanted this power, these miracles, to be available to him; even to the point where he was willing (and dangerously misled) to think he could pay for the gifts of God -

When Simon saw that the Spirit was given at the laying on of the apostles’ hands, he offered them money and said, “Give me also this ability so that everyone on whom I lay my hands may receive the Holy Spirit.” – Acts 8:18-19 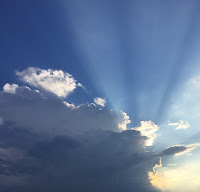 Simon’s discontent and desire for more than what he had landed him in a lot of trouble with Peter, one of the apostles of Jesus. Peter saw an abysmal problem with Simon’s greed and spoke to it, for he saw in Simon a deep issue, a heart issue. Peter spoke straight to his heart -

For I see that you are full of bitterness and captive to sin. – Acts 9:23

Bitterness and captivity. That’s discontentment. None of us have perfect lives. We have all experienced the bitter disappointments that life can bring. Job loss, divorce, the wounds of a friend, a miscarriage. Our world is replete with ammunition to embitter our lives.

And bitterness leads us not to freedom, but to captivity. Sin, the quick and easy solution to help us drown out and deal with our problems. Sin, the great promiser, with handcuffs hidden behind its back. Sin, the merciless task master and father of addiction.

There is a remedy to this dilemma, a key to free us from cold prison cell of the next best thing. There is freedom from the voice that is never satisfied. That key is thanksgiving spoken from a grateful heart (whether that heart feels it or not). Surrounding us now are many things to be grateful for. And we’d see them if we would just slow down and take the time to consider. Can you reflect on just one thing today that you are grateful for; one thing that will start your heart down the path to contentment?