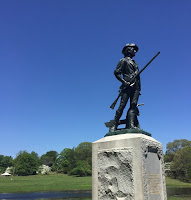 The gospel is a gospel of peace. It is the good news that we are righteous, not because of our own inherent goodness or deeds, but because of His righteousness.

Christ died for sins; once for all. The scripture says we are the righteousness of God in Christ. And the righteous are as bold as a lion. Our faith is not in how righteous we are within ourselves; that is, at best, inconsistent. We have good days and we have not so good days. We have seasons of immense victory and we have times of intense struggle and failure. In the good and in the bad, we must find his grace to be sufficient.

We say that those who are members of the armed forces are in the service. They are taught and t…
Post a Comment
Read more
May 13, 2017

Once Separated
Have you seen the movie, Oh God? It’s about a grocery store manager who has an encounter with God. The Almighty (played by the 90 year old, cigar smoking George Burns) appears to Jerry (played by John Denver) many times throughout the movie; in a car, in the shower, over the radio. The experience is rather unnerving for Jerry and the reactions of others to his run in with God are varied, as expected.
I have conversations with God in my car. I haven’t seen Him, I haven’t heard an audible voice, and I haven’t smelled cigar smoke, but I know it is God speaking to me, because what He has said, what He has spoken to my heart, has come to pass.
I believe God wants to speak to each of us today.
Several weeks ago I was on my way to work and God spoke to me in the form of a question. And the question came with the answer embedded in it, like the music on the radio is embedded in the radio signal. His question was, “Do your sins cause a separation between you and God?” How would you…
Post a Comment
Read more
May 06, 2017
Debt Free
There’s a comical variation of the song “Heigh Ho” from Snow White and the Seven Dwarfs that some of us have sung (as we’ve headed off to that dreaded job). It goes, “I owe, I owe, it’s off to work I go.” We sure do owe, don’t we? We owe the electric company, the gas company, the bank, and some of us, the credit cards. Oh the dreaded credit cards. Why aren’t they called debt cards, or better yet slavery identification cards?
Debt is a burden, a heavy chain, all of us know in one form or another.
The bible says that love keeps no record of wrongs. It is speaking to the list of debts owed you by an offender. We’ve all been offended and it’s hard not to keep a record of that offense. The neighbor’s dog that does his business in your flower bed. The boss at work that makes it difficult to enjoy any time off. The unfaithful spouse. We’ve all suffered resentment.
The heart is hurt, the heart breaks, the list is added to. Be careful! Look at the list and check it twice before you ente…
Post a Comment
Read more
More posts